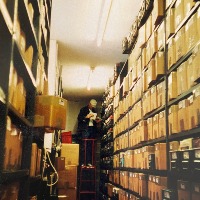 90s hip-hop headz pay attention as some unreleased gold from Jimmy Plates & Endevers is shortly to see the light of day in the form of Vinyl Comeback. Plates first met Philly (also of Fabyl outfit El-Jay Burner) hip-hop collective Endevers during a London crate digging trip in 2002 and what followed was a more or less spontaneous recording session in Plates’ garage which became the 2003 Big Rigs/ Tasty Kakes 12″. What is largely unknown is that not long after, a second collaborative session followed in which Plates and Endevers knocked out multiple tracks…which have ended up on ice for years. Enter Fabyl Recordings some seventeen years later and the track is all set to be the first single off the forthcoming and tongue-in-cheekily-titled With No Delay… LP – which sounds like it will feature the rest of the same sessions during which Vinyl Comeback was recorded. Expect to be enveloped in heavyweight, boom-bap of the 90 bpm-ish variety!
(Out 7 August on Fabyl Recordings)