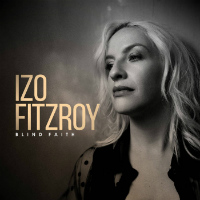 Izo FitzRoy’s back with new disco-soul single Blind Faith – the third to be taken from her forthcoming album How The Mighty Fall. Turns out it’s neither a commemoration of a certain late sixties supergroup nor a comment on the government’s Brexit strategy but a meditation on giving relationships another go when they haven’t been quite what they should. Helping her along on this one are The Haggis Horns (on the horns, obviously), her own Soul Sanctuary Gospel Choir (backing vox, also obviously) and Mercury Prize-nominated producer Colin Elliott. Which means you can have every confidence that even if the economy is flat-lining, this at least is worth a punt.
(Out now on Jalapeno Records)