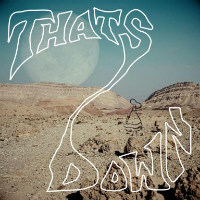 When Howie B helped kick start the whole trip-hop thing in the 90s, did he still think it would be a ‘thing’ a quarter century later – or that – as with new single, Thats Down, he’d still be making it? I say trip-hop, the presence of Chinese DMC champion, DJ Wordy, and his turntablist skills along with an ambient electro/ techno sound palette pushes the envelope enough you’ll be asking whether it’s an addition to the genre or a fusion that yields something new. Well, that and, ‘Where’s the apostrophe in the title gone?’ Anyway – you can ponder those mysteries while you watch the Hiraki Sawa-directed video. As to what you can expect on that, imagine things kicking off with the components of one of those bloody Richard Long sculptures deciding to have a boogie, then chuck in a bit of MC Escher and then imagine Long and Escher getting really stoned together and you’re ballpark.
(Out now on Pussyfoot Records)