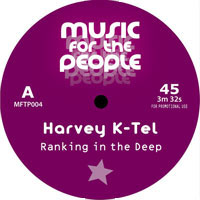 I had a rank in the deep once. It was nearly as good as this. And by ‘this’ I mean the latest effort from the man named Harvey K-Tel. Like one DJ Shepdog before him, K-Tel works his mash-up magic with a certain Adele acapella but substitutes Sly & Robbie for something a little more upbeat and rocksteady – sounds a bit like an old number by The Jamaicans. And what do you know? This refix is just as good. I don’t know anyone who would be seen dead listening to Adele’s original for fear of being regarded as someone who’s on the rocky road to getting excited about the new Snow Patrol album or the latest by Newton Faulkner but I do know lots of people who would throw their hands up and wave them around like they just didn’t give a fuck to this. Big up!
(Out w/c 4 August 2011 on Music For The People)

(PRESS RELEASE)
Following on from the massive Boops Apocalypse, which was a favourite with Daddy G and Craig Charles, DJ and producer Harvey K-Tel returns with another cheeky version of a very well known tune, this time a certain Miss A gets the rocksteady reggae rhythm treatment. Already played by the likes of Don Letts and guaranteed to make dancefloors bounce. On the flip, is a genre defying blend of dancehall and stadium rock to get people moving, you’ll have to guess Who gets sampled on this one.

Strictly limited to 250 copies, once it’s gone that’s it!