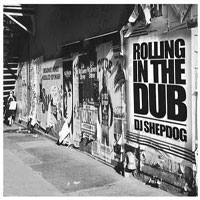 “I thought Adele’s “Rolling In The Deep” vocal would sound even better over some classic dancehall,” says Shepdog of his recent booty. Oh what? Better than over some MOR rock backing-track that says ‘safe’ better than a fucking banker’s bonus when there’s a Tory government in power? Yes, yes, bastard yes, a billion times better than that. Incidentally bankers and their thieving mates have probably got Adele’s original slotted in between James Cunt and Last Night Of The Fucking Proms on their Iphone 4. This reggae refix, on the other hand, slots in nicely between anything decent ever provided by bass culture. Long live DJ Shepdog! Cop his shit early next time over at my dub homies’ blog ting niceupyourarea.blogspot.com and pick up your copy of Rolling In The Dub below:
FREE DOWNLOAD – DJ Shepdog – Rolling In The Dub