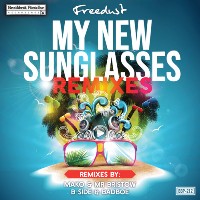 When the sun’s out there are few pleasures finer than stepping out while rocking a new pair of sunglasses, are there? Freedust know this of course, as MB readers will be aware from coverage of their New Sunglasses single from February last year when it was anything but sunny – in the northern hemisphere at least. Four others who also know this are Mako & Mr Bristow and Badboe & B-Side, who have remixed the aforementioned track for a release during a summer which the planet hasn’t seen since the Cretaceous period or something. Mako and Bristow take the original’s electronica-meets-sixties-exotica and go straight for an old school booming big beat vibe while Badboe and B-Side plump for a bang up-to-date twenty-first century funky breaks vibe. Two lots of new New Sunglasses then; pleasure squared!
(Out now on Breakbeat Paradise Recordings)