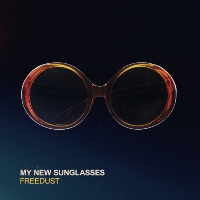 MB regulars may remember Freedust from the two EPs they released in 2018 and 2019 on which they melded the retro breakadelica of Skeewiff with St Etienne-style vocals. So the news that the outfit are back with new single and video, My New Sunglasses – the title track off their debut LP – will no doubt be well-received. An infectious affair with a soaring hook, the single is a melting pot of influences including sixties and seventies sunshine soul and psychedelica along with 80s and 90s pop. How to represent such goings-on via the audio-visual medium though? Perhaps focus on the character of a low-paid catering employee who slips out the back of work for a break, dons new sunglasses and becomes a high fashion, dancing superstar. Well, I know how it felt when I finally found a worthy replacement for my twenty-year old Von Zippers.
(Out now on Danca)

Posted on 5th February 2021 no comments