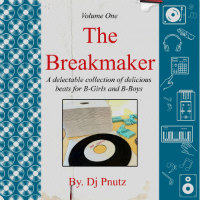 Are you sitting comfortably b-boys and girls? Don’t worry, you won’t be sitting at all once The Breakmaker begins for it is the latest musical feast for the feet and ears from DJ Pnutz. A new one already? It seems like less than half a year since our Californian heroine last hit us with breaks – but then perhaps that’s because it was less than half a year ago that our Californian heroine hit us with the breaks in the shape of hip-hop instro LP Work Flow. Where does she find the time?  Nevertheless, back she is – with a   seventeen tracker to boot – and in her more usual guise as purveyor of beats to uprock to.  I say ‘more usual guise’ but actually there is a bit of envelope-pushing on this new one.

Firstly, let’s talk about the bass. It’s positively cavernous. Turns out the intent was to head for a grittier style and so things had to be fuzzed-up for that ‘old studio feel.’ Box checked. Which brings us to the second thing in which that first thing plays a leading part. The sound of the LP is stylistically informed, it seems, by the twin inspirations of seventies library music and heavy funky psychedelia in a way distinct from its predecessors – a vibe not at all dispelled by the retro TV samples sprinkled throughout. As you would expect tempos are rather brisk and the breakbeats suitably windmill-inducing but the whole LP is also laced with retro organ sounds from snappy opener Make It Or Break It to the album’s one nod to slower pacing – atmospheric closer Dub For Dessert. Keep your ears especially pinned back for the car-chase breaks-funk of Spanish Harlem, the Eastern-sounding Beat Fricassée and the booming rhythms of Sugar And Spice.
(Out now HERE)

Posted on 27th November 2019 no comments