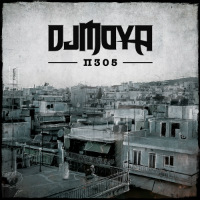 Long-time MB readers will know that while the greater proportion of what gets featured on the site is aimed squarely at the dancefloor, occasionally something a little more chin-stroky makes it past MB’s strict door policy. That of which we speak goes by many names of course – instrumental hip-hop, downtempo breaks, trip-hop and (if you’re James Lavelle) abstract hip-hop. It also remains enduringly prolific as a genre despite having been unfashionable for about the last two decades with much that is produced being of mediocre quality. If you thought the turntablist side of the sort of music pioneered by the likes of DJs Shadow and Krush in the early nineties has been long played out, you might do worse than cast an ear over the work of Athenian beatmaker DJ Moya and his first solo LP, II305.

II305 (the ‘II’ is actually the Greek letter Pi but WordPress doesn’t seem keen on the symbol) is actually a thoroughly enjoyable listen that both harks back to pre-Endtroducing Shadow and Strictly Turntablized-era Krush whilst looking forward as well. Moya’s beats aren’t always as dusty for one thing and his drum patterns as liable to nod to the lurches and stutters of glitch-hop (as on the middle trio of Dainja, Trax Of A Beast and Stuck In The Elevator) as to more fluid boom-bap. If you want dusty, scratchy old boom-bap though, that’s there too in the form of the balance of tracks. The hip-hop referencing cuts are always on point and the scratches probably never more dextrous than on the appropriately-named Hip-Hop Reps while the evocative samples and melodies range from the melancholy (opener No Escape) to menacingly creepy (Biblical Destruction) to the sweepingly cinematic in closer A Better Livin’. Tempos aren’t always super slow either – much is in the 90 bpms while Midnight in SKG is a positively zippy 111 bpm. By the end of it though, the biggest question is, when’s he going to get an emcee on these beats? Preferably someone from NYC and with vintage skills.
(Out now HERE)

Posted on 6th February 2019 no comments