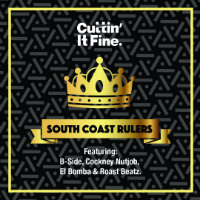 South Coast Rulers from Cuttin’ It Fine Records? Have they opened up a business selling shatterproof plastic measuring strips? Don’t be daft! It’s the new one from DJ Roast Beatz’ label featuring tracks from such esteemed production dons as El Bomba, Cockney Nutjob and two from the big man – Roast Beatz, himself – one in collaboration with B-Side. Turns out this’ll be the first in a series of booty edits. Cockney takes point liberating Jay Z (among others) from the clutches of Linkin Park to ride a beat constructed from one of many rocksteady versions of Express Yourself before El Bomba chops out a Will I Am hook and pitches it down over some heavy boom-bap bounce. The second half finds B-Side & Roast Beatz re-flipping Berner, B-Real, Snoop and Vital’s Faded before Roast Beatz winds things up (whilst presumably on a wind-up) with what can only be described as a pneumatic house re-lick of Tag Team’s Whoomp!. Best cut? The monkey’s leaning towards Bomba’s bomb. Mini-mix below – check it out!
(Out 31 August on Cuttin’ It Fine Records)