VARIOUS: Songs For Andy (A Collection Of Re-works, Re-Edits & Tributes To Andy Taylor) 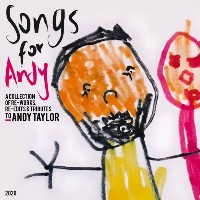 If you wanted a measure of the respect the sadly and recently departed DJ/producer Andy Taylor commanded on the music scene then here it is, Songs For Andy (A Collection Of Re-works, Re-Edits & Tributes To Andy Taylor). The ten-tracker, has been assembled by Mr Bird and features contributions from Smoove & Turrell, Lloyd Wright, Daytoner, Kid Felony, Dedy Dread, The Rebel, Krash Slaughta, David ‘Renegades of Jazz’ Hanke, Andy’s band The Hook & Slingers and Mr Bird himself. Everyone involved had either previously worked with Andy in some way or been remixed by him and the tracks themselves are a mixture of re-works from stems of Andy Taylor tracks, remixes of Taylor tracks, or brand new tracks and tributes and take in funk, soul, hip-hop and reggae and even David Hanke’s Vangelis-like remix of Tryfan as the closer. In summary then, a collection crafted with love for a well-loved guy. All proceeds from the sale of album go direct to Andy’s family.
(Out now HERE)