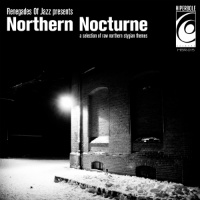 Northern Nocturne finds Renegades Of Jazz‘s David Hanke (a.k.a. Hiperbole Records‘ label boss) putting together a celebration of the night in the shape of a sixteen-strong set of instrumental breakbeat cuts. And whether by design or accident (I suspect the latter) the musical mood trajectory of the tracklist is singular. We start with a sense of early evening promise, gradually venture into narcotic-fuelled territory and then wind up in a very dark place before a brief flicker of forlorn reflection towards the end. It’s more or less my typical Friday night in musical form.

To put it another way, Hugo Kant and Ninja Tune’s Bonobo soundtrack an early evening beverage in pleasant surroundings, things get all under the influence when Q4 turn up and by the time Josh Furey gets there we’ve somehow managed to get ourselves lost in a maze of tunnels linking ‘ghost stations’ on the subway with walled up abortion clinics around which we’re being pursued by a hideously deformed mutant humanoid. Or maybe that’s us by this point on such a night – it’s hard to tell. Finally Brombaer gives us a glimpse of the pre-dawn greyness and a sense of calm, albeit one tinged with the suspicion that we might still be fucked-up and hallucinating everything after succumbing to our narcotic of choice. We’ve all been there. Recommended. The album, that is – especially if you’re in a downtempo, trip-hoppy, ‘I really want to listen to the soundtrack of a Euro-horror flick that doesn’t exist’ kind of mood.
(Out 8 October on Hiperbole Records)

Posted on 3rd October 2012 no comments