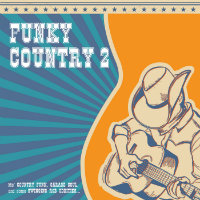 No teasing or otherwise delaying of gratification here, Perfect Toy is so excited about Funky Country 2 that they’re hustling it out into the world less than two months after its predecessor. And it’s an excitement you’ll be sharing. Said predecessor was, of course, January’s Funky Country which (as the name implies) assembled tracks which were funky yet might also be considered ‘country.’ As previously pointed out, we’re broadly in the territory of Light In The Attic’s Country Funk series, though (as also previously pointed out) Perfect Toy’s offerings (while equally funky) are a) more dancefloor-oriented and b) play a lot looser with the ‘country’ tag. Indeed, as the PR blah notes, both albums encompass not only country that is funky (or possibly funk that is country) but blue-eyed-soul, and ‘swinging rhythm & blues oddities’ from the 1960s and 70s.

Pretty much everything on this is straight fire though the one that perhaps best captures the ethos of the title is the track that presumably gave the series its name. That’ll be Jesters III’s Funky Country – a twangy syncopated bump with vocals from Mike Bullman who is very obviously influenced by a certain lip-curling, hip-shaking former denizen of Memphis Tennessee and the vibe is very much of the ‘when Elvis got funky’ variety. Having said that, Janet Lee belts out, in the broadest of Dixie accents, Might As Well Give Up (’cause she’s gonna get you anyhay-ow) and there’s a bit of a lonesome yodel in Mystic Four’s Minutes Of Heaven. Other treats include Scotty Evans curio Richest Man In The Graveyard – arguably more northern (country) soul than country funk and the country ‘surf’ of The Notions’ Brand New World. No ‘genre’ compilation would be complete without at least one novelty record and a cover too, of course. You’ll find these represented by The Marvels’ Funky Duck and Jimmy Rogers Quintet’s I Feel Good respectively. As with the first volume however, the biggest cut is once more a funky white boy psych-out in the shape of Valverda’s clattery monster Gates Of Hell. Stetsons off to Perfect Toy once again, then.
(Out 9 March on Perfect Toy Records)