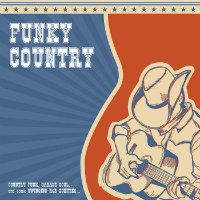 When Light In The Attic put out Country Funk in 2012, and then its sequel Country Funk Vol. 2 two years later, who would have thought that the made-up genre of ‘country funk’ (essentially any 70s country track on which the drummer wholeheartedly embraced the syncopated rhythm zeitgeist) could yield so many bangers. Now Perfect Toy Records get in on the act with an all-killer compilation, every bit as funky as the Light In The Attic comps., even more dancefloor-oriented and without a single track in common.

Admittedly the ‘country funk’ remit is slightly different here. Well, I say ‘slightly’ – it’s a fair bit looser. Funky Country‘s take on the nexus of country and funk is broad enough to include the duelling jazz meets bluegrass strings of Cal Collins Trio’s Mountain Chops, the broadly twangy and undeniably funky blue-eyed soul from the likes of beach music originators The Embers (with their Fast David & The Wolfpack) and the equally twangy-but-funky covers of standards such as Polk Salad Annie. Anyone familiar with Tony Joe White’s languid original version of the latter will find Manson Manuel Express’s uptempo country-psych-soul take somewhat different (though just as pleasing to the ears) while Steve Kathy & The Sha-Onas excellent garage soul take on Bobby Gentry’s Mississippi Delta is closer in tempo despite having a more spit and sawdust feel. Particular highlights include the fat chunk of funk that is the Big Jim Cartwright opener Stone Born Country Boy, Bo-Jack’s equally loose and syncopated Flower Child, and Hope Inc’s Lucille with it’s scorching organ. Standing above even these however is Undying Love from Pennsylvania garage psych band Bust which features white boy country vocals over a monster funky groove. Stetsons off to crate-digger and compiler Daniel Marques then and DJs let me hear you say ‘yee-haa.’
(Out 26 January on Perfect Toy Records)