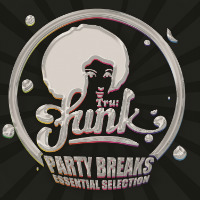 In today’s internet-era, the public’s appetite for interesting ‘stuff’ is voracious and their memory of said ‘stuff’ so short that they’ve practically forgotten whatever it was they gawping/ listening/ mooing at in the second it took them to ‘swim’ from one side of the digital fishbowl to the other. Plus the amount of ‘stuff’ out there keeps increasing exponentially. In this environment, any record company that fails to market effectively is a soon-to-be-defunct record company and marketing in today’s – er – market effectively means putting out an artist’s EP/ album, then ten seconds later putting out the remix EP/album, then ten seconds after that compiling the best tracks onto a ‘best of’ compilation album of all your artists’ best releases.

But wait! What if your label releases compilations to begin with – like Tru:Funk‘s Party Breaks and Nu Party Breaks series? If shit was already on a compilation the first time round – where do you go from there? Durrr! What are you? Some kind of PR virgin? You create a compilation of the best tracks from your compilations of course! Welcome to Tru:Funk’s Party Breaks Essential Selection – which compiles nineteen Tru:Funk releases from previous compilations plus a bonus free cut (Warson and DJ Noz’s ghetto-funked Moby number Sometimes). Grinding ghetto funk, disco-fied rhythms, b-boy breaks and even a few mellower bumps – it’s all on there. You can expect a heavy presence from BMD, Chudy, DJ Axe, Warson and Jayl Funk with occasional look ins from Cez 14, DJ Kid Stretch, Myniemo, The MustBeat Crew, Nynfus Corp, Timothy Wisdom, The Funk Hunters and DJ Noz. Oh and the superbly named Toastbusters whose moniker does not however excuse the fact that they’ve used a Spice Girls sample. Words fail me. No excuses are needed by DJ Axe though who drops mellow Guru-featuring groove Funky Lady or various roof-raisers from BMD, Chudy and Jayl Funk. A new (nu?) series follows in the new (nu?) year.
(Out now on Tru:Funk)

Posted on 9th December 2013 no comments