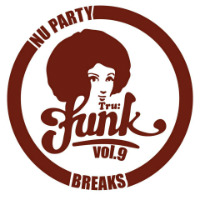 It’s the final instalment of Tru:Funk‘s Nu Party Breaks series and it’s a massive double length effort. Final instalment? Yep, don’t panic – plans are afoot for newness in January. In the meantime Vol. 9 is fifteen tracks deep and features a wealth of scene-heavyweights with Badboe, Morlack, Rory Hoy, Funkanomics, The Breakbeat Junkie & DJP all putting in an appearance. Badboe gets pole position with his Ludacris-appropriating Thriller In Manila while Ad n Kutz nip at the heels of the rear of the pack with the release’s freebie – a crowd-pleasing booty that tag teams – er- Tag Team’s Whoomp There it Is with The Stones’ Satisfaction and in between these lies all manner of breakbeat shenanigans. Lurking about a third of the way into the action for example is some early 90s pop-house nostalgia from Morlack as he delivers a breaks version of one of the most annoying songs ever committed to a recording – Crystal Waters’ Gypsy Woman. This would be a clear-cut contender for most shameless track of the release were it not for a quite serious challenge later on from Warson who (not to be outdone) mines Backstreet Boys’ (Everybody) Backstreet’s Back for the hook on Another Banger. Fear not though – more decorous fare is on hand from the not-very-extant-of-late Funktomas and Rory Hoy vs. The Unknown Dj who drop this release’s runner-up and winner respectively in the shape of a cheeky version of the Yardbirds’ For Your Love and a Fatboy Slim/ NWA/ Jean Knight/ ATCQ mash Xpress Your Big Stuff. Oh my god! As Busta Rhymes once chanted between rhyme action from Phife Dawg and Q Tip…Player below plus another classic DJ Tanner video for the Funktomas track below that.
(Out now on Tru: Funk)