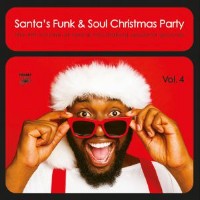 Tramp Records’ Santa’s Funk & Soul Christmas Party series was quite possibly the Tramp compilation series that was never intended to be a series.  Vol. 1 has only ever been Vol. 1 in retrospect after Vol. 2 and 3 came out – and anyway, who knew there was so much funky Christmas material?  Mind you, having said that, the gestation for this one has been seven years –
the longest gap between volumes since 2011′ s first which raises the prospect that this particular seam of funk might finally have been mined bare.  It’s a terrifying prospect I think you’ll agree – after all no-one wants a funk-less Christmas in which the ears are exposed to the multifarious terrors of hideously overplayed Now That’s What I Call Christmas-style ‘hits’.  So let’s count our blessings while we have them and consider this latest set of funky Yuletide fare.

A similar length to its predecessors, this one is a twelve-track set, unless you get the cd or vinyl which have one and two extra tracks respectively. Aalso like its predecessors, it mostly consists of golden era Christmas funk and soul classics with the odd bit of something newer. In this case, the newer is represented by the late Sharon Jones with her and the Dap Kings delivering their hard-hitting slab of Yuletide soul, Ain’t No Chimneys In The Projects by way of an opener. Wayne Champion’s up next with It’s X-Mas Time and managing to find and then join the dots between soul jazz and classic crooner material. Bey Ireland delivers a stomping mod-style 60s R&B heater with All I Want For Christmas Is A Go-go Girl and then the script is flipped completely with the synth-laden 1980 old school hip-hop cut Christmas Strutt on which female rappers Hot & Sassy do their best Paulette & Sweet Tee Winley impression and endearingly veer slightly off the beat occasionally. Staying with that end of the 70s/ early 80s vibe, the next cut is Bill Deal With Pure Pleasure’s seasonal but funky disco number It Feels Like Christmas, before Major Hardy rolls up with some funk proper on I Won’t Be Home For Christmas. An accordion on a funk track? You heard it here first. Sam Applebaum brings the celebration back to the 60s with the funky beat-underpinned The Year Around Chistmas, and Ray Williams keeps it there with the funky soul of Santa Claus. Popping back even further into the history of Christmas cuts comes Bobby Peterson swinging things up on Christmas Presents, before the raw-edged blues-funk of Tiny Powell’s Christmas Time Again. Then it’s the final trio – unless you get the cd or vinyl version. Eddie & The De-Havelons is the first extra track and represents with a 60s soul stomper for the go-go dancers, Fred Sabastian’s swinging again on Everybody Is A Santa Claus and finally Ruth Harley bookends this compilation with a jazzily funky number Christmas Is. Cop the vinyl though and you’ll also get her rather different to Earth Kitt’s version of Santa Baby – in this case a bit faster with a more knowing but less pretend innocent-cum-sultry vibe. You’d like to hope it’s not the last in the series but if that should be the case, it’s a case of quality all the way to the end.
(Out now on Tramp Records)

Posted on 25th November 2022 no comments