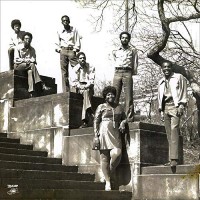 It might have been nearly three years since Tramp last put out a label retrospective, but they remedy that now with new compilation Gut Funky (The Best Of C.R.S. Records) – named after the dirty seventies sister funk of Midnight Madness’s Gut Funky which appears towards the end of the album.  The label itself was the project of Philadelphia record producer/ label owner Curtis R. Staten who ran it in fits and starts from the late 1960s to the early 1980s, during which time he released at least fifteen singles and two LPs of quality Philly R&B, funk, and gospel of which only the gospel isn’t represented here.

The pure lilting R&B of opener That’s The Kind Of Man I from George Johnson & The Mondells’ Am is the only thing on this to sound like it’s from the pre-funk era though the fills and rolls on the drums certainly hint at the shape of things to come a few years down the road.  From that point onwards however, all shades of soul and funk are very much to the fore.  A case in point is second track – the monkey’s favourite on the comp. – another George Johnson cut, Just Because You’re You, an uptempo burner that sits at the nexus of northern soul and funky R&B, where it is joined by Bonnie Blanchard’s A Real Good Lovin’ Man Pts. 1 and 2.  A third Blanchard number also appears in the form of the slightly slower but no less dope You’re The Only One.  Long-time MB readers may be familiar with the Zodiacs Also Hey Rugh Nut since it appeared all the way back in 2012 on Tramp’s Movements 4 comp. and it’s joined by another cut by the same band the hectic Don’t Change On Me. In addition to the title track, Midnight Madness also feature with the much slower psych-soulful Feelings, while the closer is the funky doo-wop soul of Carl Sherlock Holmes’ Think It Over. Also to look out for is Mitzi Ross’s rare sister funk nugget Man Hunt. A gut funky compilation indeed, then. It’s what Tramp do.
(Out now on Tramp Records)

Posted on 8th February 2020 no comments