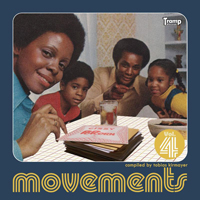 Another coup for Tobias Kirmayer – the digger with his finger on the funk trigger! Kirmayer is the man behind Germany’s Tramp Records – a label currently doing more to propagate original rare funky music around the globe than anyone else – so when he says he’s been working for two years on a compilation in his Movements series and, in his opinion, it’s the highlight of said series so far, you should be sitting up and paying attention. And your reward will be Movements 4 a collection of quality funky music from soul jazz to disco-era funk and everything in between so staggeringly rare that even seasoned diggers would give their left nut to possess it. This LP is ‘rare groove’ incarnate – no mean feat in 2012 when people have been digging up and playing rare grooves for the last twenty years or more. How does Kirmayer do it? A lot of legwork and phonecalls by the sounds of things because these cuts are so rare they were only privately pressed back in the day. What we’re discussing here my friends is the rarest of the rare – up there with Yeti pelts, genuine unicorn horns and convincing Western European fiscal policy. Of course ‘rare’ doesn’t necessarily mean good but anyone who thinks Kirmayer would consider releasing anything not up to scratch clearly doesn’t know Tramp Records’ track record.

An early stand-out among an album of stand-outs is Dino & The Dell-Tones super raw uptempo organ-led soul-rnb bomb Sticks And Stones but it’s followed by a string of classic funky bumps including Preston Love’s horns-based Cissy Popcorn, the sexy sister funk of The DM Movements’ Ooo Wee Baby, and Bro Byron’s fat soul horns groove of the previously (and criminally) unreleased Booty Whip. Also, if the opening drum break of sister soul Honky Games doesn’t get you, nothing will. Later in the LP it’s all about funk with clear disco influences as titles like Ricky Williams’ Discotheque Soul indicate. The mighty Soul Bros. Inc. are represented by another such cut (which wouldn’t have fit stylistically on Tramp’s funky-soul S.B.I. compilation from a while ago but finds the perfect niche here) as are Ernest Skipper and The Odyssey Group who deliver pefect mirrorball-dancefloor material. It’s also got to be worth mentioning the obscure C Fortune and J Brinson’s funky soul gem Hipster which surely needs to be dropped on a 45 all of it’s own. Don’t sleep when this comes out or you’ll be kicking yourself in the face repeatedly for months. Apparently the first 500 copies come with a free Soul Chargers’ 45. How much more persuading could anyone need to get this?
(Out 12 March on Tramp Records)