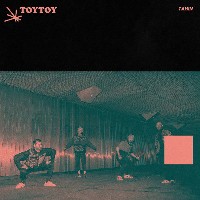 Ok, let’s be honest – sometimes the monkey gets behind. For one, there’s the annual deluge of new releases in autumn that is difficult to stay on top of and then there’s Christmas with the novelty drops and, well, non-blog stuff like parties and family. After that? Well, after that is the annual deluge of spring releases which is as difficult to stay on top of as the autumn one and finally there’s summer when it’s all parties and holidays. So perhaps it’s no surprise that with the Golden Rules label dropping a new digital single every couple of weeks over a period of months in the (very long) run-up to the vinyl release of their annual funk LP sampler, the monkey hasn’t stayed on top of their schedule. And Tahin by German band TOYTOY (all caps, apparently) is not the only single the monkey has missed out on – as you’ll see from the post after this. What it is however, is a jaunty slice of summery instrumental jazz-funk, underpinned by a phat and clattery drum break and featuring a synth topline.  And if you are going to soundtrack the hottest European summer on record due to catastrophic human-wrought climate change, perhaps the sound of a sweltering summer in early 80s Miami is the one to evoke.
(Out now on Golden Rules Records)