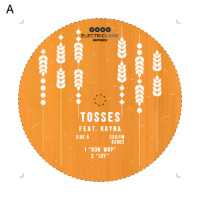 It seems MC Rayna‘s so busy these days with her band Antiplastic that there’s little time for the sort of sterling guest vox that have graced beats by the likes of Badboe, Skeewiff, Jiggyjoe, Sammy Senior, Tonic, and Tosses & Varvez. Luckily Ale Tosses of the latter has used all his wiles to get Rayna on two new cuts. What to call the LP though? I know – Tosses feat. Rayna! Doo Wop is a vaguely electro-swingy bass-heavy number while Joy is a gloriously chugging slab of guitar-powered breaks fuzz. Of course it would be rude not to have a remix so who better than Jayl Funk to work his magic on Doo Wop and imbue it with a summery nu-funky party breaks vibe. The full package also includes a spread of stems including instros, vox and FX from the two original mixes. And you can’t argue with that!
(Out now on Electric Cave Records)