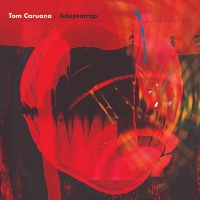 Recently released, Adaptatrap is the new instrumental album from producer Tom Caruana.  MB readers will know Caruana as the man behind such mash-up LP colossi as Black Gold and An Adventure To Pepperland Through Rhyme & Space as well as for various Professor Elemental releases and his live hip-hop project Son Of Sam.   Clearly a man who has a prodigious facility with samples, the latter project showed him equally as capable at producing live instrumentation.  And while Son Of Sam saw him working with a full live band, what is perhaps less well known is how much of a multi-instrumentalist Caruana himself is.  Adaptatrap finds him playing ninety per cent of the instruments including drums, bass, guitar, keys and synths and in the process revealing how much of that TC production sound you’re already familiar with was not samples nor other musicians either.

Perhaps unsurprisingly, given its live aesthetic, Son Of Sam’s Cinder Hill is the most similar of Caruana’s previous work of to Adaptatrap and you could certainly imagine near enough any of the beats on here on a Son Of Sam release with no or minimal re-arrangement. Also, if the beats are hip-hop for the most part, the vibe is on a soundtrack, cinematic tip. While opener Bunsen Burner and 34 Bond Street have an elemental (or should that be Elemental?) quirkiness about them, Northern Lights has a psychedelic, trip-hoppy feel and Dennis The Space Hopper‘s insistent bass groove is by turns the backdrop to darkly threatening psych guitar, summery organ and funky oscillating Rick James-type synth. Milk Float meanwhile, uses an almost Squarepusher-type approach to drum n bass while Night Specs could easily be a beat catering for the likes of Kool Keith and Adaptatrap goes Ethio-jazzy. Yet more evidence, were it needed of Caruana’s impressive versatility.
(Out now on Tea Sea Records)