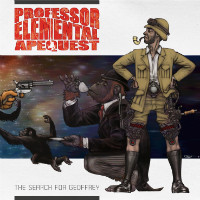 That most British master of ceremonies is back. I refer of course not to Mr B the so-called ‘gentleman rhymer’ (a mere charlatan, despite his many enthusiastic confederates) but to a true eccentric genius from the days of empire – Professor Elemental. Regular followers of the Professor may recall that our man was careless enough to mislay his friend and butler, Geoffrey the ape, in a previous LP. In this latest installment of his adventures entitled, naturally enough, Apequest he is forced to search for said simian after attempting, with a dismal lack of success, to find another animal capable of making a decent cup of tea.

The ensuing capers find the Professor employing his prototype time travel trousers (since Geoffrey appears to have made off with the later model) and embarking on a hilarious skit-punctuated adventure through space and time. And while the opening of the album nods towards Edgar Rice Burroughs’ Pellucidar and Land That Time Forgot, it’s not all comedy steampunk pastiche. The Inn At The End Of Time appears to reference Neil Gaiman’s World’s End Inn from The Sandman, the medieval court skits and tracks are pitched somewhere between Monty Python’s Quest For The Holy Grail and Connecticut Yankee In King Arthur’s Court, Confessions Of A Cab Driver in the Jon Clarke-featuring future section is like a neo-Victorian Fifth Element, and the Limbo section all very Dr Who. Which as Elemental and producer Tom Caruana are very obviously aware gives them absolutely vast lyrical and production scope.

Whether the requirements be stirring verse on the mic or precise comedy skit timing, Elemental is in his – er – element, flawlessly delivering everything in his trademark amalgam of Lionel Jeffries’ Grandpa Potts in Chitty Chitty Bang Bang and Michael Caine in Zulu. Meanwhile Caruana’s beats match Elemental’s adventures turn by turn switching things up from a stirring Saturday Morning adventure serial-flavoured beats (The Replacement and Theme Music), to sci-fi Deltron-style boom-bap (Tempus Fugitive, Confessions Of a Cab Driver and End Of Level Boss), swing-hop (Celebrate), funk (The Inn At The End Of Time) among others. This sounds like it was an utter blast to make and frankly, it’s a pleasure to hear it blasting from the phonograph. Hurrah!
(Out now on Tea Sea Records)

Posted on 1st December 2015 no comments