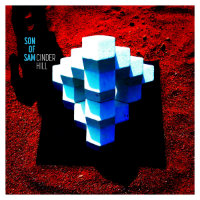 If you’ve been paying attention over the last month and a half you might have noticed how the dog days of August and the start of September turned into an Indian ‘summer of Sam’ with the staggered release of no fewer than three singles in advance of the mighty Cinder Hill – the full-length debut of Son Of Sam. The band,
consisting of hip-hop production don Tom Caruana (of Wu/ Hendrix and Wu /Beatles mash-up fame) along with rhythm section John and Joe Sam and keys and sax man Richard Halligan, are responsible for creating the beats on Cinder Hill and subsequently roping in a frankly staggering assemblage of emcees and vocalists to unleash verbal carnage over them. Not that they’d have needed much convincing for, as John Robinson notes on the intro, “this is music lovers’ music…a celebration of that boom-bap.”

Son Of Sam originally formed in ’03 and, inspired by what was then the still-booming underground boom-bap scene, had written and played but crucially never recorded much of the music for this album. That feat was accomplished in a mammoth one-day session in 2011 that yielded over thirty beats. Following this, a variety of other musicians were roped in to add stuff like brass, strings and harps, after which Caruana variously edited and re-arranged or applied a light touch to generate the instrumentals you hear on this. Then it was a case of headhunting the emcees who number among them golden era legends Masta Ace, Large Professor, Sadat X and Edo G, 90s/early 2000s underground giants like Prince Po, El Da Sensei and J-Live along with the pick of the current underground including Guilty Simpson and Soundsci. Yeah, I know.

Cinder Hill weighs in at just over an hour long and contains seventeen tracks – every one of which is a banger. If you caught the singles, you’ll already be aware of Come A Long Way where Masta Ace and Large Pro offer life retrospectives over a Wurlitzer-powered beat, Prince Po’s rapid fire bars over the stutter-funk of Flying Fist and Soundsci dropping brag raps on the menacing guitar-edged Put It On Ya. The surprise is that the tracks featuring the lesser-known emcees bang equally hard. Four of these stand out in particular though. Deep Breath provides a vehicle for a hypnotic mic turn from Michigan rapper Jamal Bufford over a funk groove laced with mariachi brass while the heavy boom-bap lope of Coastin’ totes a female rnb hook and John Robinson holding forth about no less a topic than hip-hop itself. Toss-up for LP highlight however must surely be between the Lifford and Blaise B-featuring self-affirmation number Fighting Talk which opens with the kind of sung hook and dubby bassline that might have graced an early Wu-Tang cut and Forward March on which Oxygen and 7even Thirty give the mic no quarter over the LPs fattest drums and a monster bass line.

Cinder Hill then – less cinders and more what is traditionally known as ‘straight fire.’ And the even better news? There are enough beats left over from that 2011 session to form the bones of the next album too.
(Out now digital/ Vinyl begins shipping after 23rd Oct. on Tea Sea Records)