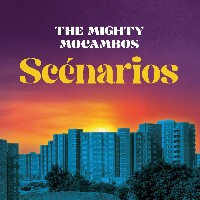 As long-heralded by a series of singles beginning with their Live At Jam PDM! 45 from two years ago (possibly before this LP was even actually a ‘thing’), here, finally, is The Mighty Mocambos’ Scenarios long player – an entity that re-affirms why the word ‘mighty’ appears between ‘The’ and ‘Mocambos’ in the band’s name.  Of course, this one is packed with dope original compositions and an inspired choice of covers (Harold Faltermeyer, JJ Cale and breakers’ favourite Shannon) while the playing and production is pretty much everything you could ask of a studio LP.  But that’s the thing – this isn’t a studio LP.  It’s all the way live.  And it’s just as well they’ve got the audience sounds on there to prove it too, because if they hadn’t, you probably wouldn’t believe this was live, it’s so tight.  It’s worth noting that the LP isn’t a live recording of a single gig however.  The tracks were recorded at several events across the last couple of years : a live in-store session at Hamburg’s Groove City record shop Groove City, a spontaneous performance at Postdam’s JAM PDM! breakdance battle in Potsdam, a Pitt Hopkins Music Session charity gig, an open air affair at the Import Export in Munich in 2021 and a soundcheck for a gig that got called off.  Which all goes to show that this lot didn’t just luck out on one performance where everything fell into place but instead they manage it time and again.  Even that’s not the whole story about why Scénarios is so impressive because it also seems that, in the Camp Mocambo, a live album on which you get to merely get to hear live versions of studio favourites just isn’t enough. Nope, everything on this one was written or arranged especially to be recorded live and for the first time in public to boot.  Man – now that is mighty!

And so it is you get to enjoy the sound of Congo Square, New Orleans filtered through a Hamburg prism in St Pauli Second Line by way of an entry point.   It’s a powerful way to  establish the album’s highly funky credentials though there are some interesting departures from this template in the set.  Two of these are twin centrepieces Four Two Three and Silent Heroes culled from a recording of a live video streaming session in which the band go to full cinematic mode, maintaining that distinctive Mocambo sound despite being both drumless and acoustic for the occasion.   Almost all the rest of the LP is full-throttle funk however with the breakers very much in mind – especially on Nichola Rogers-penned Something’s Missing, and the uptempo funky wah-wah squelch of Arabesque Breakin’. The band’s superlatively funky cover of Harold Faltermeyer’s Axel F (a.k.a the Theme From Beverley Hill’s Cop) is still the don though and worth the price of admission alone.  No wonder the closer – the final acoustic cut and a rework of a number originally done with Lee Fields – is the aptly-titled Where Do We Go From Here?

Posted on 1st November 2022 no comments