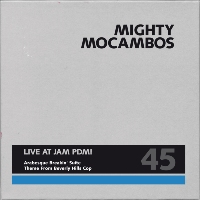 You know an outfit can play tight when they’re prepared to drop on wax what they’ve recorded live – and such are the very mighty, Mighty Mocambos, whose Live At JAM PDM! vinyl 7″ is exactly what it says on the tin. Recorded straight to 8-track tape at Fabrik Potsdam last February, during the JAM PDM! Breakdance Battle, these b-boy favourites played a scorching version of all-original medley Arabesque Breakin’ Suite and then topped that with an absolutely banging version of Harold Faltermeyer’s 80s synth classic Axel F – a.k.a the Theme From Beverly Hills Cop. Now re-imagined as a heavy, heavy slice of tropical dancefloor funk, this latter also features a furious 30 second drum breakdown. You know you want to!
(Out now on Mocambo)