THE MICROPHONE MISFITZ: Escape From Babylon Volume 3 + ‘It’s On’ video 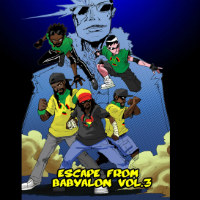 And so it continues – the journey begun in 2012 with Escape From Babylon and reprised three years ago with Volume 2 now finds the Windy City’s Microphone Misfitz continue their rearguard action against declining standards in hip-hop, race relations – hell decline in pretty much everything – with Escape From Babylon Volume 3. And you thought standing up for traditional values came from a conservative mindset. Still, someone’s got to stand up for all things decent in the moral vacuum of the Trump-era and they might as well do it with fat beats and laudable lyricism.

The Misfitz’ territory is very much that which formed the basis of the underground after the late nineties schism – as slo-mo b-boy cut Sons & Daughters makes clear, “Peace to the mothers and fathers of dope rap/ We are the sons and the daughters of boom-bap.” Musically, that means we’re in J5 and Dilated territory while lyrically there’s often more of a firebrand sense of social justice that you might expect from Perceptionists or rap grandaddy KRS-One. As is traditional with all names mentioned above though, it is necessary to rinse those who don’t have the skills to pay the bills. Who I’m Not for example finds D-Nick considers those who lack the facility to pay the utilities, “with poor mic skills and poor technique/ poor lyricism and poor stage presence/ a poor disposition that’s disrespecting the essence/ in that case I’ll post costs and send his poor ass packing/ with that pitiful, pathetic, misuse of the art of rapping.” As noted above though, the lyrics often reserve more and darker ire for a corrupt, and often racist Stateside elite, “Propaganda machine promoting us to be dumb/ While casual loss of life steady making us numb,” that goes as far as advocating some sort of revolution while advising care not to be sidetracked or have your sense of purpose undermined by the Superficial Hate of fake nooz. If that all sounds a bit serious, perhaps it’s because shit is. That doesn’t mean the Misfitz don’t know how to party though. There’s the intro from Darryl ‘DMC’ McDaniels that leads straight into soul-sampling funky (but conscious) roof-raiser It’s On for example or deeply funky b-boy cut Black Paranoia which combines conscious comment with a heavy dancefloor groove. And let’s not forget posse cut Crazy 8 featuring a host of guest emcees. Escaping Babylon was never going to be easy, but at least it sounds dope.
(Out now HERE)