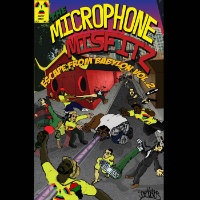 Chi-Town five-piece outfit Microphone Misfitz are back with Escape From Babylon Volume II, the follow-up to 2012’s Escape From Babylon. Back then it was a case of a quality boom-bap in a year full of quite a lot of quality boom-bap. Phat shit hasn’t been quite so thick on the ground in 2015 however, so this is more than welcome and the further good news is that it’s even better than what must surely retroactively be referred to as ‘Volume 1’.

In terms of sound we’re in late 90s/ early 2000s underground territory with the dynamic and delivery superficially somewhere between Jurassic 5 and The Perceptionists with the beats leaning more towards the former while the conscious and more overtly fiery lyrics lean more towards the latter. The attitude is right there in the album and song titles after all – Escape From Babylon – Empty Ballot, Soul Fighter and Soul Rebels – and given the current state of racial affairs in the US more power to them. There’s also a rasta vein running through the album, notably in opener Douglass, Einstein & Garvey and reggae-inflected highlight Dusty Razors. The other best cuts include the loose and funky P.A.R.T.Y, the car chase vibes of Barz and the intense Kill Bill theme-sampling, Jeru The Damaja-introduced Soul Rebelz. All that and an vocal introduction from DMC of Run DMC. An endorsement indeed.
(Out now HERE)

Posted on 4th August 2015 no comments