THE EMINENT STARS: Bumpin’ On 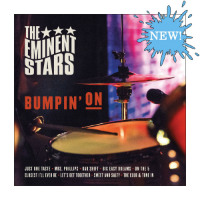 Five years down the road from debut long player Sittin’ In and Holland’s The Eminent Stars are back with a second album Bumpin’ On that very much capitalises on the promise of both that first LP and funk burner single Bar Shift from 2017. And if you’re wondering ‘does that mean a set heavily influenced by the legacy of the Crescent City sound of the 60s and 70s recorded on vintage equipment then the answer is an emphatic affirmative.

This album delivers a set that is a few tracks shorter than its predecessor but one both more rounded and more stylistically varied but also more consistent – the last of which factors arguably because the only vocalist present this time is Bruce James. Opener Just One Taste reminds the listener that it’s not just Neal Francis keeping the flag flying for the now sadly departed Dr John with full In The Right Place-era vibes – and if that’s your bag, you get it even more so on the breezier Big Easy Dreams on which James heads, ‘down the tracks to the dirty south.’  On The 5 meanwhile provides grittier and moodier bar-room grooves along with smouldering organ-led groover Let’s Get Together while Closest I’ll Ever Be is the fast-then-slow torch song and Sweet And Salty is a loping instrumental that Daptones wouldn’t have minded knocking out. The only other instro. is Mrs Phillips which sees the band capably heading into cinematic funk territory, the organs once more to the fore, which leaves just two tracks on the vinyl format.  One of these is Bar Shift of course – a blistering slice of dancefloor funk that there can’t ever have been any doubt would be included and the other is the mammoth nine-plus minute Live Medley featuring two tried and tested live favourites from Sittin’ In – R&B stomp The Club which segués into super-heavy blues-funk instro Tune In.  If you’re getting the digi. version you can also expect to find squelchy Meters-funk instro 5 O’Clock In The Morning and another live version of another Sittin’ In cut, the chugging Dead Cat. Whichever format you get however, one thing is certain, things will be very much bumpin’ along.
(Out 22 November on Tramp Records)

Posted on 26th November 2019 no comments