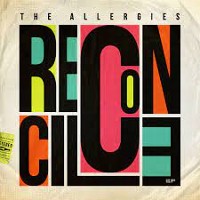 Bristol’s The Allergies see in the new year with their Reconcile EP which finds them getting two recent tracks, one brand new track and one oldie in the same room to celebrate the links between them. And what mainly links them is the influence of black music. There’s the two recent singles for example – Treat You Right which overtly pairs blues and breaks, the single prior to that, Sometimes I Wonder, which pairs soul and breaks and 2016’s God Walked Down which goes a stage further, pairing gospel soul and breaks. A clear continuity then which reaches its apogee in opener (also the one new track) – Reconcile – on which Charles Morgan’s soulful rasp soars over a lively, lilting blues-based beat and chords and the merest hint of psychedelic jazz in the occasional flutey trill, all wrapped up in a party breakbeat production style. A somewhat more introspective affair than is typical of the duo’s oeuvre, this EP finds the band venturing beyond high energy party breaks and hip-hop into a wider stylistic territory.  As always though, where The Allergies tread, you’re liable to want to follow.
(Out 13 January on Jalapeno Records)