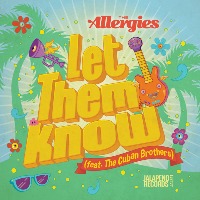 Say hello to The Allergies ‘lil friend’ – new dancefloor weapon and single, Let Them Know, featuring Los Hermanos Cubanos a.k.a. a certain now-legendary Scots outfit. Could this be the record that sees our boys crash the mainstream party? It’s got to be on the cards, what with five years of Radio 6 and then 2 plaudits, all manner of TV-tie-in syncs and praise from every direction. So who better to team-up with and spread the word to the rest of the world in the run-up to the release of forthcoming LP Say The Word, than hard-partying supremos, The Cuban Brothers? As you’d probably expect then, Let Them Know, is a Latin-themed riot of party breakbeats and cheeky rhyming but don’t think Moneyshot and Rackabeat have forgotten to pack heat on the flip as well. Here you’ll be equally unsurprised to find unofficial third Allergy, Andy Cooper, popping up on the mic yet again and this time holding forth over an extremely mighty beat for Lightning In A Bottle. It certainly is. That’ll let ’em know – now go don your shades, 70s Y-fronts, bandido ‘tache and throw some shapes.
(Out 19 June on Jalapeno Records)