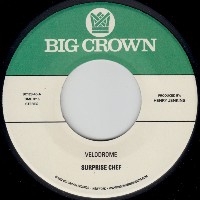 Actually the flip-side to the previously covered Velodrome on Surprise Chef’s forthcoming 45, Spring’s Theme is arguably the monkey’s preferred track of the two. That title Spring’s Theme though – an ode to the season of regeneration? Or is ‘Spring’ a character in a retro crime flick of the band’s imagining? It could pretty much function as both but either way – don’t assume things are all sweetness and light. I mean, it all starts out with a bit of ‘flowers in their hair’ folk-funk whimsy but that’s before the drum break proper comes in at around the one-minute twenty mark, hinting at a darker underbelly to the earlier section’s whimsical hippie dream. By the time everything drops out except for the bass, the drums and the odd sinister bit of feedback, we’re in a Charlie Manson-esque third act and you can instantly see why the home of El Michels Affair a.k.a. Big Crown Records snapped them up.
(Out 20 May on Big Crown Records)