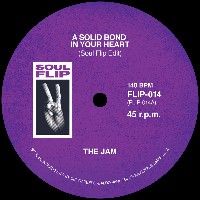 None of your guest productions for the fourteenth Soul Flip Edit 7″, for this one is helmed by the Soul Flip team themselves which amounts to a Del Gazeebo production as ‘conducted’ by Aldo Vanucci. But who’s getting the edit treatment this time? Turns out it’s Detroit soul crew The Capitols and – bit of a new direction – The Jam. The Jam?! Going Underground The Jam? The very same. And who hasn’t listened to A Town Called Malice and thought – well that’s basically a northern soul track done in a punky/ new wave stylee isn’t it? Not that that’s the track they’ve picked. Nope, that’ll be the lesser known A Solid Bond In Your Heart and, yes, the demo version actually by The Jam, not the neutered Style Council version. Does it work? I think you’ll find it works like a bastard but for those of a nervous disposition, the B-side is a version of The Capitols reliably ‘golden era of soul’ big hit, Cool Jerk. Uptempo soul edit bangers? You don’t mind if you do.
(Out 12 August on Soul Flip Edits)