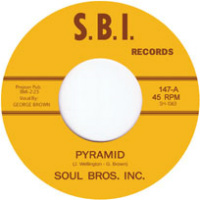 Soul Bros Inc. are one of the monkey’s favourite funk bands ever so the prospect of a Soul Bros Inc. 45 coming out is so exciting it’s made a bit of wee come out. This 45 lifts two tracks from the previously released Story Of… LP also released by Tramp Records and shows two completely different sides of the band. Pyramid is the fuzzy, warm, orchestral soul number that warms your spirit while Girl In The Hot Pants is a stank slice of raw Texas funky soul which’ll give male funk djs a diamond hard boner and have everyone in the house doing it to it in a jiffy. Or as S.B.I. put it – “Doc told me to take it easy/ “Are you going to go before you’re time?”/ But if good lookin women in hot pants kill me/ I don’t mind dyin’.”
(Out 21 January on Tramp Records)