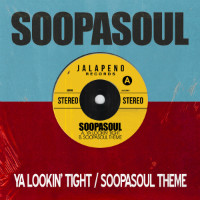 Not least of the tidal wave of vinyl 45s coming out at the minute, the new seven inch from Soopasoul will be – what – the fourth Jalapeno 45 in as many weeks – when it drops next week. Featuring Ya Looking Tight and Soopasoul Theme, this drop may ring bells since both tracks originally appeared back in 2009 on Soopa’s debut LP Twin Stix – albeit in the sprawling glory that twelve inches of wax allows. Here however, the insistent horns-led b-boy groove of Ya Looking Tight and the JB’s ish trumpet-led jam Supersoul Theme have been whipped into mean and keen short edits for 45 kings everywhere.
(Out 7 December on Jalapeno Records)

Posted on 28th November 2018 no comments