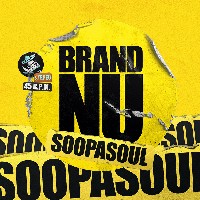 Time for more from the Jalapeno vaults to go out on 45 and in this case from the back catalogue of Soopasoul, though with something of a twist. That’s right – a twist – for this version of uptempo funk heater Brand Nu is not the one that featured on 2009 Soopasoul LP, Twin Stix. Nope, this is the ‘142 Original Studio Mix’ a.k.a. the first recorded version that later became a bit more refined. At least, that’s what he’s claiming. If the monkey’s experiences of production are anything to go by, that’s the first recorded version Soopas is admitting to. Anyone who’s ever done any production or recording will naturally suspect the ‘142’ means it was the 142nd take and probably the umpteenth version of tweaking that using software. We’ve all been there – ‘Brand Nu 142 final.AIFF’ – nope, ‘Brand Nu 142 final FINAL.AIFF’ – nope ‘Brand Nu final FINAL THIS ONE.AIFF’. Hours of fun. Comes with the ‘142 Slippy Wah Instrumental Mix’ on the flip.
(Out now on Jalapeno Records)