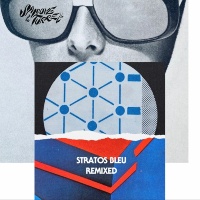 Dropping today is Smoove & Turrell’s Stratos Bleu Remixed – the long awaited LP of remixes for their recent late 80s/ early 90s disco-cum-electronica-cum-housey long player Stratos Bleu. While the original bore all the hallmarks of S&T quality we’ve come to expect – the fact remains that if you’re a funk and soul type person it possibly wasn’t for you and, as it goes, the remix LP probably still isn’t either for the same reasons. Except for the efforts of one man – Dr Rubberfunk – who has taken on the minimal and vaguely Moroder-ish synth-drenched, bleep-fest of Never Wanted You More and transformed it into a rolling slice of funky ambience perfectly complimenting the meaty tones of Mr John Turrell. It’s amazing what wonders a nice drum break can work. Nice one Rubbers. The remainder of the remix album contains the already released remixes plus a number of new ones.
(Out today on Jalapeno Records)