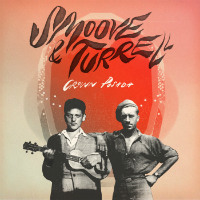 It’s a bit of oft-repeated wisdom that a new classic song can be identified from the listener’s feeling that they have heard it somewhere before – only to discover that they haven’t. Another bit of oft-repeated musical wisdom is that after the ‘difficult third’ album – a band’s output tends to tail off a bit. The relevance of the first of these musical pearls of wisdom will be recognised by anyone who’s heard any of Smoove & Turrell‘s previous three LPs since they’ll have had that sense of ‘hang on – I feel like I know this track!’ at various points on all the albums. Anyone who hears the fourth however will have it pretty much from start to end. They’ll also be able to confirm that the second pearl of wisdom is, at least in this outfit’s case, utter bollocks.

The LP opener and first single, You Could’ve Been A Lady, is a blistering take on a minor Hot Chocolate gem from the early 70s, for example. Of course, there is always the danger that a such a cover of a track by an act as huge as Hot Chocolate could dominate an album. Which it might have done here if this album had been put together by a lesser team. But we’re not dealing with a lesser team. Smoove (a.k.a. ‘Berry Geordie’) has a couple of decades of production experience under his belt, the tunes are more than capable of going head-to-head with anything the likes of Pharrell can offer, Turrell’s voice can go head-to-head with anyone on the planet and the lyrics have everyman appeal. And so it is that You Could’ve Been A Lady sits comfortably alongside, rather than towers over, warm slices of original disco soul such as No Point In Trying and Fight On that Errol Brown might have been proud to have written.

Two particular highlights include the b-boy soul of Now That Love Has Gone – which pulls no punches in its indictment of twenty-first century Britain and lyrically reveals a disgust with the direction things have taken (“Life is driven by the corporations/ Got more money than the whole damn nation”) and recent single B-side Glue Bag Flags – which could have been an A-side itself. Boasting a double-time signature, this latter alternates between moody, sulking 80s funk and an uptempo twenty-first century take on northern soul while Turrell ruminates about squandered youth in a post-industrial north east that has yet to feel the benefits of being part of a ‘northern powerhouse’. The sense of being culturally threatened is simmering again beneath the surface of anthem of resilience Fight On and by this point in the LP it’s fairly clear that if hardship is truly required to produce soul music that it can be found in Britain’s neglected north-east as well as in Detroit or the deep South in the States. And yet the band’s love for their area and the deep roots they have within it is clear from the way they commemorate a certain Geordie boozer of note in the LP title and the back and front covers which feature pictures of Smoove & Turrell’s fathers and grandfathers respectively.

Make no mistake – this album is a modern classic – the product of an enviable amount of musical skill and knowledge that has been lyrically tempered with all the conviction of world-weary experience. The factories might have closed long ago but Crown Posada finds the forges of north-eastern creativity fully stoked in Smoove & Turrell’s twenty-first century, blue collar amalgam of Chic-style disco and northern soul.
(Out 14 October on Jalapeno Records)