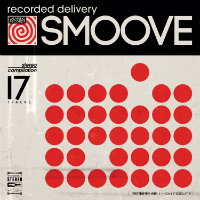 Eight years after his original Jalapeno Records remix comp. First Class dropped, Smoove finally follows up with the sequel, Recorded Delivery. Eight years! Why the wait? Well that’ll partly be the small matter of writing, producing and touring the three Smoove & Turrell LPs that have come out in that time, all those live DJ sets and many of the remixes which are collected on this – so many in
fact that he’s increased the set length this time round from thirteen to seventeen. Mind you, given the fact that he only used thirteen of over forty remixes that he already had in the bag by 2012, and he’s done about a gazillion more since – increasing the set list was surely a foregone conclusion.

But who has Berry Geordie (for as such he has long been known at MB Towers) been remixing and what has he selected for your delectation? You might well ask – and since you are (or maybe that was me) it’s worth noting first that despite a still huge uncollected back catalogue of remixes up to 2012, all but two inclusions on Recorded Delivery are actually post-2012 remixes. The only two tracks that came out prior to that are Smoove’s take on Fab Samperi’s Jazz Di Mezzaluna (which replaces the broken beat of the original with more straightforwardly dancefloor-friendly drums) and his rerub of The Third Degrees’ cover of Duffy’s Mercy – now tweaked into a five minute monster that it would be rude not to include.  If hip-hop’s your poison, you’ve got four tracks to pick from. The first two of these are a more dancefloor take on Chrome’s album version of Dopamine Hit and a re-version of The Allergies’ Andy Cooper-featuring Run It Back making longer, faster and smoother (or perhaps smoover). These are surpassed by the second two however which are comp. highlights as more than a bit of Bassey gets added to Renegades Of Jazz’ Lucifer-themed b-boy banger Fire and Mr Doris & D-Funk’s Back In The City feat. Mysdiggi. gets a full does of party. Another high point is Smoove’s take on Izo Fitzroy’s Say Something which transforms the track’s from its jazz-funky origins into an inspired beast of a late eighties pastiche punctuated by synth stabs. And given the monkey’s usual lack of love for such eighties gear, that really is saying something. For the balance of tracks expect re-works also of (deep breath): John Turrell (of course), Smoove & Turrell (goes without saying), Men Of North Country, Nicole Willis, The Haggis Horns, Myles Sanko, King Bee, Bahama Soul Club, The Future Dub Project, and Aldo Vanucci.

Recorded Delivery then – something for everyone and a lot snappier and more fitting a title than ‘Royal Mail Signed For’, I think you’ll agree.
(Out 13 September on Jalapeno Records)

Posted on 13th September 2019 no comments