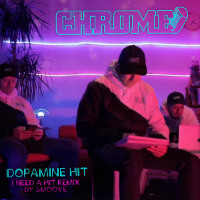 In more ‘title track as single’ news on MB today, it turns out Smoove’s remix of Chrome’s Dopamine Hit is shortly to get a vinyl 7″ release. UK rap veteran Chrome made his name as part of East Anglian hip-hop outfit Def Tex of course and Dopamine Hit is the title track of his recent solo LP on which he frankly admits to needing – well – a hit. Not a hit from the bong you understand, nor even a hit record, though that would be nice, but rather a dopamine hit. Oh, wait, he might actually get that from having a hit record. Who better then to call on for remix duties than fellow old lag Smoove, a man you can always rely on to find the old school funkiness in something when required. In the event, Berry Geordie gives Chrome’s track some Sugarhill-era polishing and what do you know – he might well have a dancefloor hit on his hands! Job’s a good ‘un. By way of a Brucie bonus, you even get a brand new Chrome cut – To The Big Apple – on the flip.
(Out 11 March HERE)