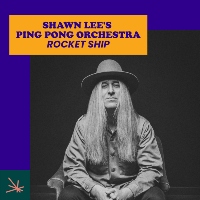 Shawn Lee’s Ping Pong Orchestra heads into outer space(funk) on new single Rocket Ship with little more than one heavy drum break, a simple bassline and falsetto vocals. True, there are a plethora of psychedelic FX and a number of occasional other instruments but they never overwhelm that central trinity. Oh – and it turns out the whole thing is written by Shawn Lee, played by Shawn Lee and produced by – er – one Shawn Lee too with just additional help on the backing vocals. Shows you what you can do on your own eh? Take that, Elon Musk, with your SpaceX billions and cast of thousands! This current single is part of label Golden Rules’ ongoing digital single release series due to be collected on vinyl in the summer and follows Ghost Funk Orchestra’s Asphalt Homeland.
(Out now on Golden Rules)