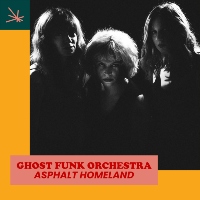 Prepare to get spaced out with the Ghost Funk Orchestra on new single Asphalt Homeland. And while its name conjures a location characterised by a thick and gloopy construction product, the single itself is a light and ethereal slice of cinematic psych-soul.  The GFO project began as the brainchild of composer and multi-instrumentalist Seth Applebaum and has now evolved into a ten-piece live band. On this particular cut, expect to hear flute, baritone sax and cello weaving in and out of rolling drums and sultry bass and the only tarmac-based thing to be evoked consisting of lost seventies summer warmth rising from the coastal highway blacktop. A digital single, this track is the sixth (so far) in a series that will be compiled on a Golden Rules funk and soul LP due for a summer release.
(Out now on Golden Rules)