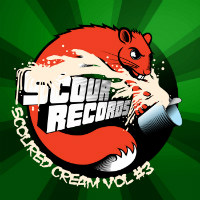 Third time’s the charm as Vol. 3 of Scoured Cream wobbles all the way to the bank not to mention, on past form, all the way to the top of Juno’s breakbeat chart, if that hasn’t happened already. It wouldn’t be a Scour release if it began without a glitch though and this one is no exception as J-Sound steps up with the swinging Glitch Up Funk Right which encapsulates the retro wobble flavour running through this release like words through a stick of Cornish rock. The Hong Kong Ping Pong boys team up with Warp9 for some Charleston wobble, Howla channels the afro-American spiritual on Long Road which grinds so hard you could make flour with it, The Phunk Junkies channel musical chameleon Louis Prima in his 50s phase, Father Funk has ghetto funk crack at Ram Jam and then El Bomba‘s back to the swing. In fact the only cut without some sort of retro flavour is WBBL‘s amping rework of Kasabian’s Fire. Best cut though? Leo‘s Screamin’ Blues – kind of at the crossroads (see what I did there?) between glitch, electro blues and ghetto funk.
(Out now on Scoured Cream Records)