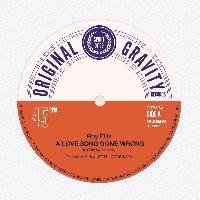 Roy Ellis? Roy ‘Symarip’ Ellis? Roy Ellis who already re-recorded Original Gravity release Rudy Skankin On The Moon and released it on the label earlier this year? The very same! As it turns out, Original Gravity boss Neil Anderson and Ellis decided to make two songs for the label and Love Song Gone Wrong is the second one co-written by Anderson and Ellis on which Ellis sounds as raucous and fresh as fifty-three years ago. The track’s chugging uptempo riddim and parping organ fully evoke the ‘spirit of 69’ when Symarip, Toots, Derrick Morgan and a host of others took dancefloors by storm and forms a truly satisfying ‘sequel to a sequel’ to Skinhead Moonstomp. And of course what else to put on the B-side but, in time-honoured tradition, an instrumental versioning of the A-side named Double Attack from Original Gravity’s Woodfield Road Allstars. A double attack indeed!
(Pre-order now/ Ships 7 November on Original Gravity Records)