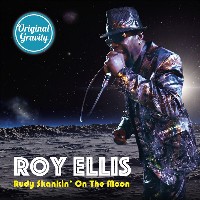 Yes, you did read that right, original rudeboy Roy Ellis of Symarip fame has a brand new 45 coming out with a brand new song on it called Rudy Skankin’ On The Moon. Readers with keen memories may remember that this song originally came out featuring a pretty righteous set of vocals by Melbourne Douglas on Original Gravity’s Reggae Dynamite Vol. 2, so – er – why the new version? Well, for one, when OG label boss Neil Anderson wrote the track a couple of years ago, he envisioned it as a kind of sequel to first-wave skinhead reggae anthem, Skinhead Moonstomp, by Ellis’s band Symarip. Unfortunately, it seemed like contractural arrangements meant that Ellis singing on the track was a no-go, so when Anderson discovered recently that there was a loophole and it could be ‘go’ after all, there was only one thing to do. Comes with early reggae style B-side instro Moonwalkin’ from Woodfield Rd Allstars.
(Pre-order now/ Shipping late July-early August on Original Gravity Records)