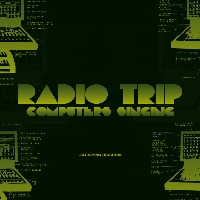 It’s all about that ‘same basic sound; same basic pattern’ here with Jalapeno Records doing the decent thing and giving a ‘first time on 45 single’ release to Computers Singing by Radio Trip (a.k.a. The Apples’ Mixmonster and Schoolmaster) off their late noughties Music Heads LP. If you remember the track (and if you’ve previously heard it, you definitely won’t have forgotten it) you’ll know it’s an uptempo b-boy oriented slab characterised by the very crunchiest of drums, organ stabs and bleeping FX. What to pair such a beast with on the B-side though? If only someone like say, Israel’s ‘king of psychedelia’ Mr Markey Funk, could do a psych-funk re-flip of this bad boy. He can? Fantastic! And his Alfomega mix certainly is being, if anything groovier, more fluid and even more b-boy oriented than the original. Why – it’s he sort of thing that’ll have everyone singing and not just computers.
(Out 4 February on Jalapeno Records)