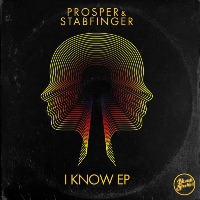 Clearly on a roll, French duo Prosper & Stabfinger are already following-up April’s Down In The Basement EP with a new three-tracker that stylistically intersects with disco in a different way on each cut. Title track, I Know, features a pair of vocalists (Ashley Slater and Georges Perin) who know their way around a sleazy P-funky inspired  groove while closer Funk Sauce (which features both San Francisco MC Awoke and funk musicians Death Town) is bass-slappy, funk-rock-tinged affair.  That just leaves middle cut, 2020 Hindsight – clearly inspired by late 70s rap – to give Everyman an appropriate musical canvas to tackle the zeitgeist. And like the man says – you can’t spell ‘funk’ without ‘f-u-n.’
(Out now on https://bombstrikes.bandcamp.com/)