PROSPER & STABFINGER: Down In The Basement 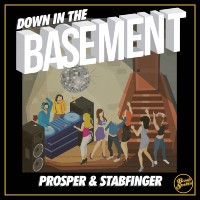 Not a Sugar Pie DeSanto/ Etta James bootleg as the name might suggest, Down In The Basement is rather three tracks of super-funky, disco-influenced breaks and hip-hop courtesy of Paris-based Prosper & Stabfinger. We open with the pumping uptempo groove of the title track, a 121 bpm four-to-the-floor affair complete with Yello style bah-bah-bahs, pitch-bending synths, squelchy wah, and emcee Awoke with a call-out to b-boys and girls. Slowing things down ever so slightly, Lucky Six goes for the full Bronx ’78 sound with Lions Pride tag-teaming it over the mic and adopting retro-hip-hop intonation and delivery and finally, there’s the Federovski remix of Boogie Bugi. This wraps things up with a bassline that channels the sound of Georgio Moroder’s Moog bassline for Donna Summer’s I Feel Love while Eastern-themed vocals and string melodies play over the top. Perfect for summer parties – which don’t feel that far away given the recent sunshine after six months of rain – even if you might have to rock up online.
(Out 3 April on Bomb Strikes)