OMEGAMAN: Under The Covers EP 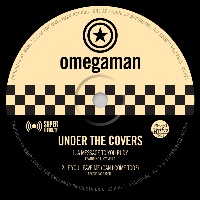 Omegaman returns with his new four-track EP, Under The Covers which includes a reboot of Dandy Livingstone’s evergreen rocksteady A Message To You Rudy, also famously covered by The Specials. A brave man, you might think, treading in such shadows but actually, this isn’t half bad at all, employing (as it does) Lucy Vella’s laid-back vocal to add a different spin to things and effectively creating a lyrical ‘hush’ to an overly excitable boyfriend. Next up is another cover, with our man now tackling Oz new wavers Mental As Anything, rebooting their If You Leave Me (Can I Come Too?), in a reggae stylee. And you’ll be glad he did (with Melbourne Ska Orchestra’s Patou on vocals, this time) for it now becomes a sweet Two Tone style affair and as far as the monkey’s concerned much preferable to the original. And the balance of the four tracks? Made up by the instro versions of the first two of course.
(Out 10 December on Fort Knox Recordings)

Posted on 10th December 2021 no comments