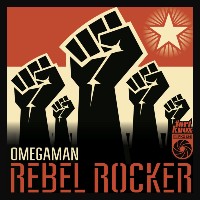 Given the way Covid has negatively affected the music industry in the past year, you’d expect the system to have made rather more people into a ‘rebel rocker’ than just Ikenna and Omegaman. Or maybe it has and they’re just not singing about it yet. Whatever the truth of the matter, Oz-breaks-maker Omegaman is back with his fat new breakbeat reggae riddim, Rebel Rocker, atop which Ikenna sticks it to the man and his system. And in the tradition of all great protest songs, the lyrics are non-specific enough you can wheel this one out any and every time you need to stick it to the man – which is really quite often given all the other ills of the world besides widespread international failure to deal with Covid competently. Comes augmented with a guitar line by The Specials’ Roddy Radiation for additional anti-system brownie points plus a faster extra squelchy big drums remix from Qdup.
(Out 5 March on Fort Knox Recordings)